What we will do today

•The expressions in today's slides so far have
been integers.
– Integers are one of Java's data types.
•primitive types: Java's built-in simple data
types for numbers, text characters, and logic.
– Java has eight primitive types total.
– Types that are not primitive are called object types.
– We'll use these four primitive types in this class:

•expression: A data value, or a set of operations
that compute a data value.
– Example: 1 + 4 * 3
– The simplest expression is a literal value.
– A more complex expression can have operators and/or parentheses.
• The values that an operator applies to are called operands.
•5 common arithmetic operators we will use:
+ (addition)
- (subtraction or negation)
* (multiplication)
/ (division)
% (modulus, a.k.a. remainder)

•What do the following expressions evaluate to? 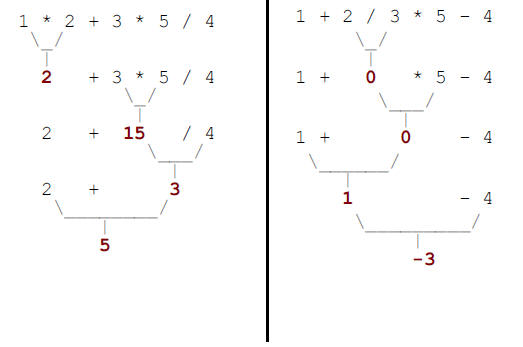 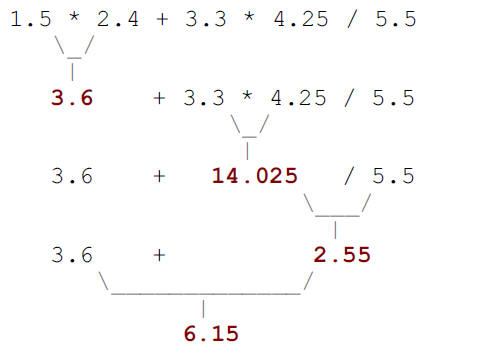 •Unfortunately, the computer represents real numbers in an
imprecise way internally, so some calculations with them are
off by a very slight amount.
– We cannot do anything to change this.
– We will generally ignore this problem for this course and tolerate the
precision errors, but later on we will learn some ways to produce a
better output for examples like above.
– Example. Write 1/3 base 10 as a decimal in base 10 and then in base 3

•When a Java operator is used on an integer and a real
number, the result is a real number.
– Example: 3 * 4.2 evaluates to 12.6
– Example: 1 + 1.0 evaluates to 2.0
The kind of number that results from a given operator
depends only on its operands, not any other operands. 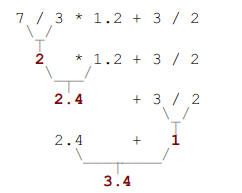 •Think of the computer like a calculator for a
moment.
– We have already seen how to calculate values.
•A flexible calculator has "memory" keys to store
and retrieve a computed value.
– In what situation(s) is this useful?
•How can we save and restore
a value that our Java program
previously calculated, like the
memory keys (MC / MR, STO / RCL)
on the calculator? 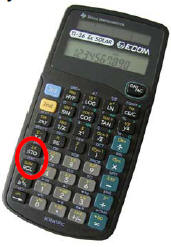 •variable: A piece of your computer's memory that is given a
name and type, and can store a value.
– We use variables to store the results of a computation and use those
results later in our program.
– Unlike a cheap calculator, which may only have enough to store a
few values, we can declare as many variables as we want, limited
only by the memory are program is allowed to use.
•Variables are a bit like the 6 preset stations on your car
stereo, except we can, essentially, have as many of them as
we want, and we give them names, not numbers.

•variable declaration statement: A Java statement that
creates a new variable of a given type.
– A variable is declared by writing a statement that says its type, and
then its name. (The name is an identifier.)

•Declaring a variable sets aside a chunk of memory in which
you can store a value.
int x;
int y;
– A (crude) diagram of part of the computer's memory:

(The memory has no value in it yet.)

•The compiler will fail if you try to declare a variable twice, or
declare two variables with the same name.
– Illegal:
int x;
int x; // variable x already exists! ERROR

•assignment statement: A Java statement that stores a
value into a variable's memory location.
– Variables must be declared before they can be assigned a value.

– Another (crude) diagram of part of the computer's memory:

– Technically, = is an operator like + or *, called the assignment
operator, with very low precedence (it is carried out last).

•A variable that has not been assigned a value cannot be
used in an expression or println statement.
– Illegal:
int x;
System.out.println(x); // ERROR -- x has no value

•Though the assignment statement uses the =
character, it is not like an algebraic equation.
= means, "store the value on the right into the memory of
the variable on the left“
in Java = is a verb, not a statement of fact
– Illegal:
3 = 1 + 2;
(because 3 is not a piece of the computer's memory)
1 + 2 = x; // syntax error

•A variable can only store a value of its own type.
– Illegal: x = 2.5; // ERROR: x can only store an int
– (Technically, the value does not need to be the same type as the
variable--it can be any type that Java knows how to convert into the
variable's type... see below.)

•An int value can be stored in a variable of type double.
The value is converted into the equivalent real number.
– Legal: double myGPA = 4;

•A variable can be declared and assigned an initial value in
the same statement, to save lines in your program.

•What should the code have been if the programmer wanted
to change the value of x to 5 ?

•Categorize each of the following quantities by whether an
int or double variable would best to store it:

•A String can be used in an expression.
– But the only operator Strings understand is + , and its meaning is
different.
– A + operator on a String and another value causes the other value to
be attached to the String, creating a longer String. This is called
concatenation.
– Remember, the precedence of the + operator is below * / % .

and prints the following:
There are 24 students in Section 58627.
There are an average of 15 students per section.

•Java has several shortcut operators that
allow you to quickly modify a variable's value:

•Since it is a very common task to increase or decrease a
variable's value by 1, there are two special operators for
this.