Martin Gardner is a very famous problem proposer. He wrote the Mathematical Games column in Scientific American for twenty-five years. Here are two problems from his book My Best Mathematical and Logic Puzzles.

2. Only two digits in the following long division problem are revealed. Find the other digits. 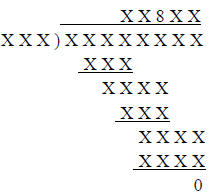