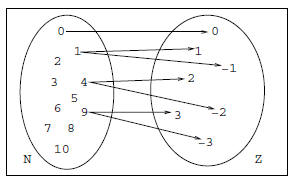 This operation is called a correspondence.

Sometimes we represent the function with a diagram like this:

For instance, the following represents the function from Z to Z
defined by f(x) = 2x + 1:

Example: Two useful functions from R to Z are the following:

= greatest integer less than or equal to x .

least integer greater than or equal to x .
For instance:

x mod y = remainder when x is divided by y.

Some properties of function composition are the following:

Function iteration. If f : A -> A is a function from A to A, then
it makes sense to compose it with itself:

Analogously we can define

A characteristic property of the inverse function is that

2.2.7. Operators. A function from A × A to A is called a binary
operator on A. For instance the addition of integers is a binary operator
+ : Z × Z -> Z. In the usual notation for functions the sum of
two integers x and y would be represented +(x, y). This is called prefix
notation. The infix notation consists of writing the symbol of the binary
operator between its arguments: x+y (this is the most common).
There is also a postfix notation consisting of writing the symbol after
the arguments: x y +.