Of course, you already know what the
integers are, and what division is…

But: There are some specific notations,
terminology, and theorems associated with
these concepts which you may not know.

These form the basics of number theory.

Iff a divides b, then we say a is a factor or a
divisor of b, and b is a multiple of a.

Facts re: the Divides Relation

An integer p>1is prime iff it is not the
product of two integers greater than 1:

Non-prime integers greater than 1 are
called composite, because they can be
composed by multiplying two integers
greater than 1.

a unique
representation as the product of a non-
decreasing series of zero or more primes.

An Application of Primes!

When you visit a secure web site (https:…address,
indicated by padlock icon in IE), the browser and web
site may be using a technology called RSA encryption.

This public-key cryptography scheme involves
exchanging public keys containing the product pq of two
random large primes p and q (a private key) which must
be kept secret by a given party.

So, the security of your day-to-day web transactions
depends critically on the fact that all known factoring
algorithms are intractable!

Note: There is a tractable quantum algorithm for
factoring; so if we can ever build big quantum
computers, then RSA is not secure.

It’s really just a theorem, not an algorithm…

Only called an “algorithm”for historical reasons.

Theorem: For any integer dividend a and
divisor d≠0, there is a unique integer
quotient q and remainder r∈N such that a =
dq+ r and 0 ≤r < |d|. Formally, the theorem
is:

The greatest common divisor gcd(a,b) of
integers a, b (not both 0) is the largest (most
positive) integer d that is a divisor both of a
and of b.

If the prime factorizations are written as

,
then the GCD is given by:

Example of using the shortcut:

Integers a and bare called relatively
prime or coprime iff their gcd= 1.

A set of integers

is (pairwise)
relatively prime if all pairs

, for i≠j,
are relatively prime.

If the prime factorizations are written as

then the LCM is given by

Let a,d∈Z with d>1. Then a mod d
denotes the remainder r from the division
“algorithm”with dividend a and divisor d;
i.e. the remainder when a is divided by d.

Note: this is a different use of “≡”than the
meaning “is defined as” I’ve used before. 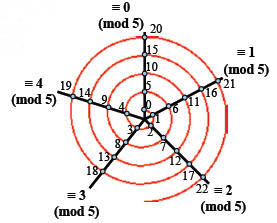